4 Areas to Explore in Dublin

4 Areas to Explore in Dublin

Larger than Central Park, Phoenix Park is one of the largest parks in any European capital city. It is known for its large deer population as well the home of the Dublin Zoo. I love spending an afternoon in the park picnicking on the grass in front of the Wellington Monument, or renting bicycles and riding around the area.

Arguably Dublin’s most famous shopping street, Grafton Street is very touristy with lots of shops lining the street. Aside from the main street itself, the side streets in the surrounding area contain hip cafes, bars and restaurants. I love walking around the area and exploring the flurry of activity that is Dublin City Centre.

The oldest university in Dublin, Trinity College is located right in the middle of the city. Home to one of Ireland’s greatest treasures, the Book of Kells, the Trinity College Library is truly breathtaking. During the summer, the College Green also hosts a concert series where many popular music groups such as Two Door Cinema Club or Alt-J have played.

Probably Dublin’s most well-known area, Temple Bar bustles with life at all times of day, as it is home to a multitude of pubs, restaurants and bars. Wander through the cobbled streets during the day to discover galleries and cafes, or at night to find some of the best bars and pubs in Dublin.

bookirishtours
Previous post4 things to do during your first trip to London
Next postReal-life Winterfell: Castle Ward 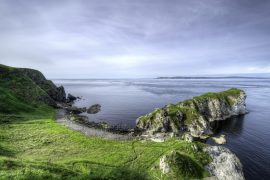